Throughout the second semester, I’ve had the pleasure of cooking alongside Brian Huston the head chef/owner of Boltwood restaurant in Evanston, as well as his team of highly talented chefs. Boltwood is one of the newer and more high end restaurants in the Evanston culinary scene. One way to describe their food is New American, but when you ask the people who work there what they cook they reply “whatever is in season and Brian feels like eating.” Boltwood’s menu changes weekly and the kitchen is open which provides an enhanced dining experience. I also think that working in an open kitchen with a rotating menu is a lot more fun for the chefs. I never made the same thing twice in the 3 months I worked at Boltwood, which allowed me to learn something new everyday.

My goal for working at Boltwood was to soak up as much knowledge as possible. Each person in the

kitchen had a different role in my Boltwood education. Kayla is the pastry chef at Boltwood and due to my love of pastry I clicked with her immediately. She trusted me right away to make full desserts. Her style of teaching me was to just give me a recipe then jump in to help whenever she saw fit. I liked this because it allowed me to show off what I already knew. Mack is a sous chef at Boltwood who is very fun and talkative. Whenever we’re cooking side by side we always start up a conversation. Mack has really taught me how to be a restaurant cook. Each day there is always a new lesson on how to be more like a cook. On the first day of work, he told me how to properly get my uniform on, where to put my towels and knives etc. He’s been in the business relatively long so he knows his stuff despite still being under 30. He always says that it’s not just about cooking well, but looking like a cook too especially since Boltwood has an open kitchen. Alex is another sous chef who is always giving me little helpful tips. He teaches me small scale things. My favorite tip he has given me is

you can peel garlic cloves by sticking a bunch of them in between to inverted metal bowls and shaking them around. Alex also always gives me little tastes of what he is making. This has greatly improved my palate because I learn about balancing flavors and new flavor combinations. Whereas Alex teaches me small scale things, Brian is a big picture teacher. He likes to hand me huge recipes and send me on my way. All the chefs and servers at Boltwood are so fun and friendly and over the course of the semester I really feel like part of the family.

At first I was given easy tasks such as chopping vegetables and herbs. While a little bland, these tasks sharpened my knife skills. I can correctly chop root vegetables, onions, scallions, herbs, supreme citrus and much more. My first major task came at the dessert station. I was given a recipe for a lemon chiffon cake and left to make it. I’ve now made this cake at least 6 times and

have the recipe memorized. I also learned how to make a caramel sauce, ice cream base, and apple tart from the sweet station. As I demonstrated culinary proficiency to Brian, I was given bigger tasks at the savory stations. I made a few marinades, sauces, and butchered octopus. The biggest task I had was preparing a chickpea tomato stew with honeyed sweet potatoes. At first I didn’t even know where to begin, this was a lot of responsibility. I got myself together and went to go grab and organize all my ingredients. The next thing I did was prep everything, such as peeling sweet potatoes, filling pots with water, chopping onions. As I got my ingredients ready the picture of the dish came more and more into view. Once I had everything prepped out I just jumped in. The sweet potatoes were boiled with a ton of honey and water. While the sweet potatoes were boiling I started on the stew. I toasted spices and sweated onions then I added in a tub of canned tomato and let the

canned tomato flavor cook out. Then I married the sauce with some kale and the chickpeas. I tasted it and it was unbelievable. When the potatoes were done I took them out and drained them. I kept the cooking stock intact and tasted it. it was sweet and buttery. I had the bright idea of adding some of the starchy sweet stock to the chickpea stew and Brian thought that was a great idea. As the stew was cooking I whipped together the yogurt sauce which had lemon juice olive oil and mint in it. What I prepared was paired with a grilled lamb shoulder.

Beyond what I learned from Boltwood, it was an amazing environment to be a part of. I’ve had a hard time finding other people to connect with over food for most of my life. Everyone at Boltwood is like me where their life revolves around food. They are always reading cookbooks, always snacking on things and talking about their next meal while eating their current one. Everyone at Boltwood was very fun too. We were always joking around. Just this week, Mack brought in some dry ice and put it in the dish sink and called Brian over saying there was a problem with the soap they were using. The other chefs also always were interested in my life, whether it was Mack asking about my prom date or Brian talking to me about the lacrosse team. I plan to keep popping into Boltwood to spend time and cook with my new family throughout the summer. 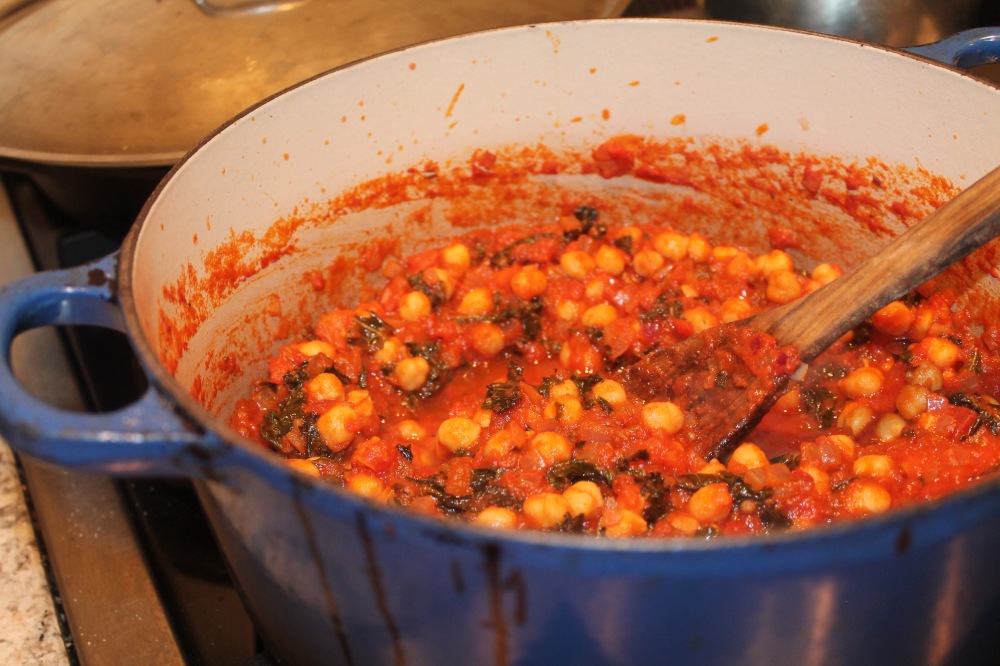 1. Boil sweet potatoes with honey butter and sachet. ProTip: They’re done when you stick a knife in them and it goes through without effort and the sweet potato doesn’t stick onto the knife. Remove sweet potatoes when done and reserve liquid for later.

2. Cook onions in olive oil, stirring frequently, over medium heat until they just start to caramelize then add garlic and stir for a minute.

3. Add kale and water and cover for 5 minutes. Then add the rest of the ingredients cover and cook on low until kale is tender.

4. Cook onions, cumin seed, and coriander seed in olive oil, stirring frequently, until onions just start to brown then add garlic and stir for a minute.

5. Add the tomato paste and stir for another minute.

7. Add in braised kale, ¼ cup of the sweet potato liquid, and chickpeas and stir. Bring to a boil then simmer for 20 minutes. Salt and pepper to taste

8. Serve chickpea-tomato stew with sweet potatoes on top and the chiffonaded mint.